Estimating the Harms of Nicotine-Containing Products Using the MCDA Approach

The group defined 12 products and 14 harm criteria. Seven criteria represented harms to the user, and the other seven indicated harms to others.

The results of this study suggest that of all nicotine-containing products, cigarettes (and small cigars in the USA) are very much the most harmful. Interventions to reduce this pre-eminence are likely to bring significant benefits not just to users but also to non-smokers and society as a whole. Attempts to use other forms of nicotine such as ENDS and NRT to reduce cigarette smoking should be encouraged as the harms of these products are much lower. 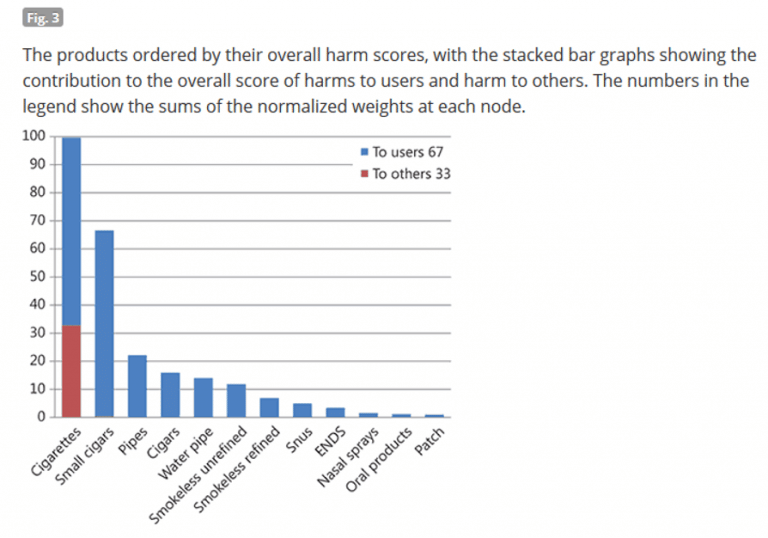 Obsolete tobacco control themes can be hazardous to public health: the need for updating views on absolute product risks and harm reduction

Implications of updating the leading themes for regulation, policymaking and advocacy in tobacco control are proposed as an important next step. A new reframing can align action plans to more powerfully and rapidly achieve population-level benefit and minimize harm to eliminate in our lifetime the use of the most deadly combustible tobacco products and thus prevent the premature deaths of 1 billion people projected to occur worldwide by 2100

The straight-forward principles of harm reduction should be as uncontroversial for tobacco products as they are for alcohol, cars, air travel, children’s clothing, sexual practices, electrical goods and other goods and activities.

Concerns for some adverse public health effects of harm reduction products such as SLT (Smokeless Tobacco) and vape are reasonable and worth trying to minimize, but there is no current evidence that such products actually represent an imminent danger to public health overall.

Efforts to discourage the use of tobacco/nicotine products need not be reduced, but should be done in a harm-proportionate way. Telling consumers that all product options are as bad as cigarettes is untrue and almost certainly as deadly for users as telling at-risk populations that condom use affords no protection.

Ethical considerations of e-cigarette use for tobacco harm reduction

Current evidence suggests that e-cigarettes have the potential to make significant public health gains through their role as tobacco harm reduction devices. In clinical practice, physicians have an ethical duty to provide their patients with evidence-based comparative risk assessments to allow them to make informed choices with respect to their smoking status. At its core, the objective of the smoking cessation agenda should be to improve population health, which will likely require some concessions in the form of harm reduction. This entails a willingness to negotiate the tensions between utilitarian and liberal ethics in designing policy that upholds autonomy while protecting broader public health interests.

Potential deaths averted in USA by replacing cigarettes with e-cigarettes

Compared with the Status Quo, replacement of cigarette by e-cigarette use over a 10-year period yields 6.6 million fewer premature deaths with 86.7 million fewer life years lost in the Optimistic Scenario. Under the Pessimistic Scenario, 1.6 million premature deaths are averted with 20.8 million fewer life years lost. The largest gains are among younger cohorts, with a 0.5 gain in average life expectancy projected for the age 15 years cohort in 2016.

The tobacco control community has been divided regarding the role of e-cigarettes in tobacco control. Our projections show that a strategy of replacing cigarette smoking with vaping would yield substantial life year gains, even under pessimistic assumptions regarding cessation, initiation and relative harm.

Harm Minimization and Tobacco Control: Reframing Societal Views of Nicotine Use to Rapidly Save Lives

FDA’s Gottlieb & Zeller state: “Nicotine,though not benign, is not directly responsible for the tobacco-caused cancer, lung disease and heart disease that kill hundreds of thousands of Americans each year”

Inhalation of the toxic smoke produced by combusting tobacco products,primarily cigarettes, is the overwhelming cause of tobacco-related disease and death in the United States and globally. A diverse class of alternative nicotine delivery systems (ANDS) has recently been developed that do notcombust tobacco and are substantially less harmful than cigarettes. ANDS have the potential to disrupt the 120-year dominance of the cigarette and challenge the field on how the tobacco pandemic could be reversed if nicotine is decoupled from lethal inhaled smoke. ANDS may provide a means to compete with, and even replace, combusted cigarette use, saving more lives more rapidly than previously possible.

Most reviews of toxicological, clinical, and epidemiological evidence indicate that the chemicals found in e-cigarettes, when used as intended, are far fewer and well below levels seen in cigarette smoke

E-cigarettes are much less dependence-producing than are cigarettes

E-cigarettes and their impact on health: from pharmacology to clinical implications

Despite many areas of ambiguity, current evidence suggest that e-cigarettes are less harmful than combustible products, but this only applies to smokers who completely switched to e-cigarettes. Thus, e-cigarettes still hold a great potential to reduce incidences of tobacco-related diseases and could be a part of the strategy to reduce the damage caused by smoking. Therefore, mechanisms should be developed to protect young people from using e-cigarettes but support smokers in their decisions to quit smoking with e-cigarettes.

The Ethics of Tobacco Harm Reduction: An Analysis of E-Cigarette Availability From the Perspectives of Utilitarianism, Bioethics, and Public Health Ethics

Much evidence suggests e-cigarettes are substantially less harmful than combustible cigarettes. E-Cigarette Availability (ECA) involves making e-cigarettes available to allow smokers to switch to them, and informing smokers of the lower risks of e-cigarettes vis-à-vis smoking.

First, ECA is supported by a public health ethics framework. ECA is a population-level intervention consistent with respecting individual autonomy by using the least restrictive means to accomplish public health goals, and it supports equity and justice. Second, ECA is supported by four principles that form a biomedical ethics framework. By reducing smokers’ health risks and not harming them, ECA fulfills principles of beneficence and non-maleficence. Because ECA allows smokers to make informed health decisions for themselves, it fulfills the principle requiring respect for persons and their autonomy.

ECA can also advance justice by providing a harm reduction alternative for disadvantaged groups that disproportionately bear the devastating consequences of smoking. Policies of differential taxation of cigarettes and e-cigarettes can facilitate adoption of less harmful alternatives by those economically disadvantaged.

We conclude that public health and biomedical ethics frameworks are mutually reinforcing and supportive of ECA as a tobacco harm reduction strategy.

Electronic nicotine delivery systems (ENDS) may reduce health risks associated with chronic exposure to smoke and their potential benefits have been the matter of intense scientific debate. We aimed to replicate three published studies on cytotoxic and inflammatory effects of cigarette smoke and ENDS aerosol in an independent multi-center ring study. We aimed to establish the reliability of results and the robustness of conclusions by replicating the authors’ experimental protocols and further validating them with different techniques. Human bronchial epithelial cells (NCI-H292) were exposed to cigarette whole smoke and vapor phase and to aerosol from ENDS. We also assessed the inflammatory cytokines interleukin-6 and interleukin-8 and the remodeling mediator matrix metalloproteinase-1. We replicated cell viability results and confirmed that almost 80% of cytotoxic effects are due to volatile compounds in the vapor phase of smoke. Our findings substantiated the reduced cytotoxic effects of ENDS aerosol. However, our data on inflammatory and remodeling activity triggered by smoke differed significantly from those in the original reports. Taken together, independent data from multiple laboratories clearly demonstrated the reduced toxicity of ENDS products compared to cigarettes.