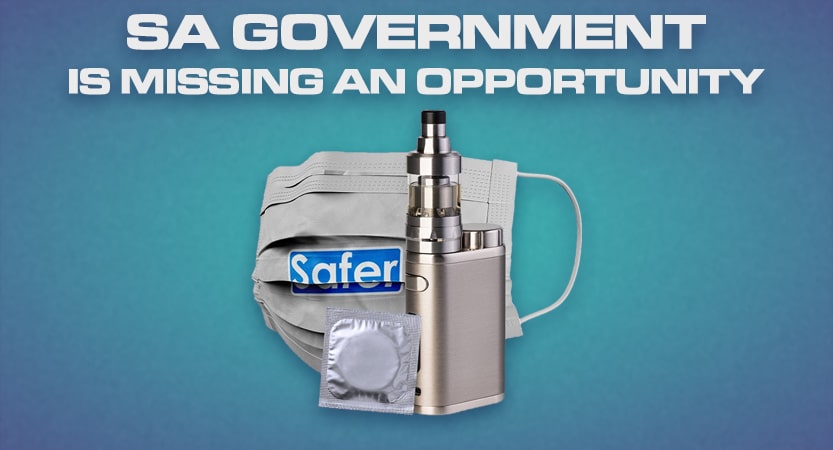 As South Africa prepares to participate in the COP9, we ask for an earnest consideration of the scientific evidence supporting vaping as a harm reduced alternative to smoking. We also ask that the voices of ENDS users who have successfully moved away from smoking with the aid of these products be taken seriously.

I write to you on behalf of the vaping community in South Africa.

According to the World Health Organisation (WHO) tobacco kills more than 8 million people each year and is the leading cause of non-communicable diseases across the globe. Smokers from low and middle-income countries are the majority of tobacco users worldwide. In South Africa, the Tobacco Control Data Initiative[1] reveals that smoking prevalence stands at a concerning 19%, with a death toll of 42 000 per annum. These figures are shocking. Behind these figures and statistics are human beings, often struggling with addiction and requiring a great deal of support to break out of the cycle of addiction.

Against this backdrop, South Africa will, in November 2021, participate in the 9th Conference of the Parties (COP9), of the WHO’s Framework Convention on Tobacco Control (FCTC). COP9 provides a platform to deliberate on the future of tobacco control efforts and regulations across the world. It is expected that new tobacco control guidelines will be adopted for implementation by member countries, including South Africa. Such guidelines will extend to Electronic Nicotine (ENDS) and Non-Nicotine Delivery Systems (ENNDS), commonly known as e-cigarettes. For your quick background, e-cigarettes are battery-operated devices that work by heating a liquid into an aerosol that the user inhales and exhales. These devices usually contain nicotine, in the case of Electronic Nicotine Delivery Systems (ENDS), while Electronic Non-Nicotine Delivery Systems (ENNDS) do not contain nicotine.

It is important to note that e-cigarettes do not contain tobacco and do not involve the tobacco combustion process, which has been proven to lead to non-communicable diseases. Reputable institutions such as Public Health England[2] have consistently found that e-cigarettes are 95% safer than combustible tobacco products. This conclusion has been supported by the UK Royal College of Physicians[3], which has found vaping to be far less harmful than smoking tobacco. The Cochrane Library[4] has found that e-cigarettes are highly effective in assisting smokers to quit their habit in the long term, and far more effective than any other form of nicotine replacement therapy. The available evidence is clear on the public health potential of e-cigarettes. These products effectively assist smokers to quit their deadly habit and, therefore, cannot be clubbed together with the very thing they are meant to replace.

The WHO’s position on ENDS is that these products are harmful and should be regulated in the same manner as tobacco. The government you lead is currently in the process of developing the Control of Tobacco Products and Electronic Nicotine and Non-Nicotine Delivery System Bill, which does not distinguish between smoking and ENDS. Alongside this, the Department of Health (DoH) is working closely with National Council Against Smoking to spread falsities about the harms of ENDS, doing irreparable harm to the agenda of Tobacco Harm Reduction in South Africa. Ostensibly, this is done to protect minors and non-smokers from nicotine addiction. There is an unfounded belief that youth are disproportionately attracted to ENDS. In South Africa and elsewhere in the world, there is no evidence to back up this contention. If anything, evidence is that initial signs of youth enthusiasm for ENDS may have been a fad, and like all fads, it is now passing, with the lowest rates of youth daily vaping being recorded in the US, the biggest problem market.

Similarly, the WHO and DoH base their stringent position on an unfounded view that ENDS users progress to smoking when the reverse of this is true. In truth, millions of smokers in markets such as the UK, US, Canada, France, Japan, and New Zealand are quitting smoking as a result of ENDS. No upward trend in smoking has been detected in these markets. A cursory glance at countries such as the UK and Canada clearly shows that ENDS should form part of a Tobacco Harm Reduction agenda if smoking is to be tackled successfully once and for all. Failure to do this will condemn millions of smokers to their early deaths and avoidable diseases, with the attendant costs to the global public health system. Yet, the WHO remains strongly committed to promoting bans and strict regulations on ENDS. This begs the question; for whom does the WHO/FCTC regulate?

As a former smoker, it pains me to know that our government does not have the best interests of smokers at heart. As a person who has lost loved ones to smoking, I am at a loss for words at government’s callous approach to ENDS, knowing full well that these products could offer smokers a less harmful alternative to their deadly habit. As a voter, it worries me that our government can be so dismissive of the concerns of millions of smokers simply to fit with the agenda of international institutions who refuse to acknowledge that it is possible for nicotine consumed ENDS to address the smoking pandemic.

As South Africa prepares to participate in the COP9, we ask for an earnest consideration of the scientific evidence supporting vaping as a harm reduced alternative to smoking. We also ask that the voices of ENDS users who have successfully moved away from smoking with the aid of these products be taken seriously. What we all have in common is that we have successfully quit or reduced our rate of smoking with the aid of ENDS. Our unique stories and experiences should not be excluded from any efforts to strengthen tobacco control efforts. We are living proof that ENDS are effective in assisting smokers desperately needing to quit their life-threatening habit.

South Africans know all too well the consequences of government turning a blind eye to science in favour of unfounded ideological positions. Many have lost loved ones to AIDS due to government’s still inexplicable refusal to provide ARV’s in the late 90’s to early 2000’s to those who were HIV positive, due to government’s dislike of the pharmaceutical industry and misguided claims about beetroot treatment for HIV. As is well documented, the costs of this gross dereliction of moral duty are counted in the thousands of lives and many families who have not recovered from the loss of breadwinners and loved ones. Mr President, do not let your government turn a blind eye to tobacco harm reduction in the service of destroying the tobacco industry. The lives at stake are simply too many.

We urge the South African government to carefully consider its tobacco control agenda in line with scientific evidence that supports the use of ENDS as part of a tobacco harm reduction agenda. We further urge government to use its voice on this important platform of COP9 to represent the interests of smokers, rather than chasing the elusive goal of crippling the tobacco industry. Whatever its merits, this goal will not serve smokers in the short term and will undermine government efforts to reduce and eliminate smoking. South Africa must use its position as a member country of the FCTC to call for the WHO to base its regulatory guidelines on credible science, rather than a dogmatic approach that seeks to vilify nicotine.

Mr President, we trust you to stand up for smokers and to align your government’s position with credible scientific evidence on tobacco harm reduction.

[3] UK Royal College for Physicians. 2019. RCP advice on vaping following reported cases of deaths and lung disease in the US.  https://www.rcplondon.ac.uk/projects/outputs/rcp-advice-vaping-following-reported-cases-deaths-and-lung-disease-us

CLICK HERE for a PDF version of the letter